I love when solutions that have been around (and worked) for hundreds of years are scientifically proven to be a valid option for us today.  Vinegar has been used in one medical application or another for several millennia and may prove to be far more effective in modern science than ever believed possible.

Doctors struggle when they treat burn wounds.  According to the World Health Organization (WHO), more than 265,000 people die every year due to burns and the resulting sepsis (blood poisoning).  Most of these deaths occur in poor countries where risk of infection is higher and treatment is less accessible.

Most burns happen in the home and at work.  Around the globe, burns that are non-fatal or a leading reason for a lengthy hospitalization, disability, and disfigurement.

In the last reported global statistics, 11 million people sought medical attention for burns that were serious but non-fatal.  One can only imagine how many other burn victims were unwilling or unable to get medical help.

Burns are some of the most dangerous injuries because of the risk of infection to fragile, damaged skin.  As your largest organ, it is always the fastest route for bacteria, virus, fungus, and parasites to enter your body.  A burn drastically heightens the danger of contagions.

A joint study out of the University of Birmingham discovered that the use of highly diluted vinegar (and the acetic acid it contains) prevents the growth of bacteria and kills bacteria that may already be present in the wound.

This is thrilling news since antibiotics don’t always work on burn victims.  They are regularly applied and administered but have proven to have several weaknesses.  Accessibility to the wound is one issue but the biggest issue is that many bacteria that infect burned tissue are too often antibiotic resistant.  Infection is the primary cause of death among burn victims. 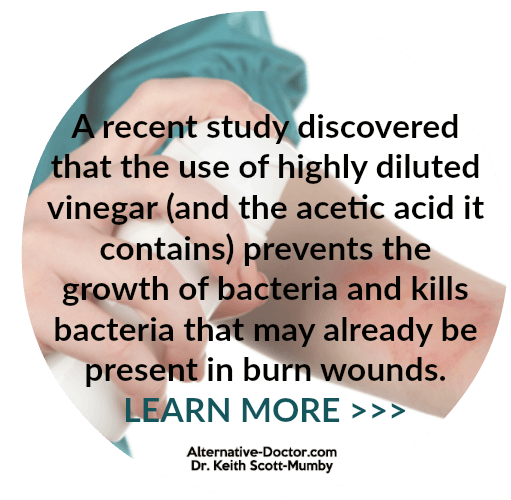 The Birmingham research was published in the PLOS ONE journal and suggested the use of a diluted vinegar in topical form when bandages are changed.  It has the ability to prevent colonization of bacteria at the site of the injury.

I know what you’re thinking.  “Using vinegar to treat burn wounds would be painful.”

This is exactly the reason it hasn’t been used before and why the results of this research between Birmingham and National Institute for Health Research (NIHR) Surgical Reconstruction and Microbiology Research Centre (SRMRC) are so important.

It takes very little acetic acid (less than 0.3% vinegar in a carrier) to be effective.  In the study, more than 29 common pathogens were tested and trace amounts of acetic acid killed them all and stopped them from creating a bio-film (the slimy growth on a wound or at the insertion point of a catheter or IV) in less than three hours.

NIHR SRMRC Clinical Scientist, Finella Halstead, stated, “As resistance to antibiotics grows, we need to find ways to replace them with alternative topical agents that can kill bacteria and help our burns patients.”

“Acetic acid, or more commonly, vinegar, has been used sporadically in medicine for the past 6000 years – being successfully implemented to treat plague, ear, chest, and urinary tract infections.  It’s a well-known antimicrobial which has seen sporadic clinical application.  Our work now gives a firm evidence base to guide the development of treatments which promise to be cheap and effective,” explained Dr. Mark Webber with the University of Birmingham.

Until concrete data is available in the form of human trials, don’t go slapping vinegar on your skin to treat a burn wound.  It will hurt…rather a lot.  For any severe burn, seek medical attention immediately after following these safety tips.

What to do when you experience a burn…

For a minor burn such as touching the back of your arm to the hot oven when removing something, home treatment is what most people choose to treat burn wounds.

In home application, you’d have to use only one small drop of vinegar to 99 drops of saline or filtered water.  If the skin is unbroken, I’d consider using a soothing carrier such as coconut oil to dilute the vinegar.

The more we rely on antibiotics, the more danger we put ourselves in for the distant future.  Now is the time to begin taking ourselves off the antibiotic merry-go-round.  Read my book, World Without Antibiotics right now to discover ways you can break yourself of the antibiotic cycle and live a longer, stronger life.