Can Your Thoughts About Aging Create Alzheimer’s

The thought of developing Alzheimer’s disease is terrifying.  For myself, losing even partial brain cognition would make it impossible for me to be a doctor, result in the loss of the business and writing I so love doing, and limit most of the things I enjoy doing on a personal level.

I’m happy to say I don’t obsess over this neurodegenerative disease…and that could keep me as safe as my diet, my lifestyle choices, and the constant use (exercise) of my brain.

Researchers with Yale School of Public Health confirmed that having negative thoughts about the aging process can change your brain chemistry.  Their findings were published in the Psychology and Aging medical journal.

The study included participants from the Baltimore Longitudinal Study of Aging and discovered that dementia-free people who maintained negative thinking in regards to getting older had the greatest decline in the volume of their hippocampus.  This is the region of the brain that controls memory (especially long-term memory) of experiences and knowledge, spatial concepts, learning, and emotions.  It is crucial to the links between memory and emotions.

Those who perceived aging in a primarily negative light showed more amyloid plaques and neurofibrillary tangles in brain tissue.  These are well-known indicators of dementia.

In other words, you can change the way you think and stop the spiral into negative thoughts right now, before they take root, and remove one more risk factor of Alzheimer’s disease from your life! 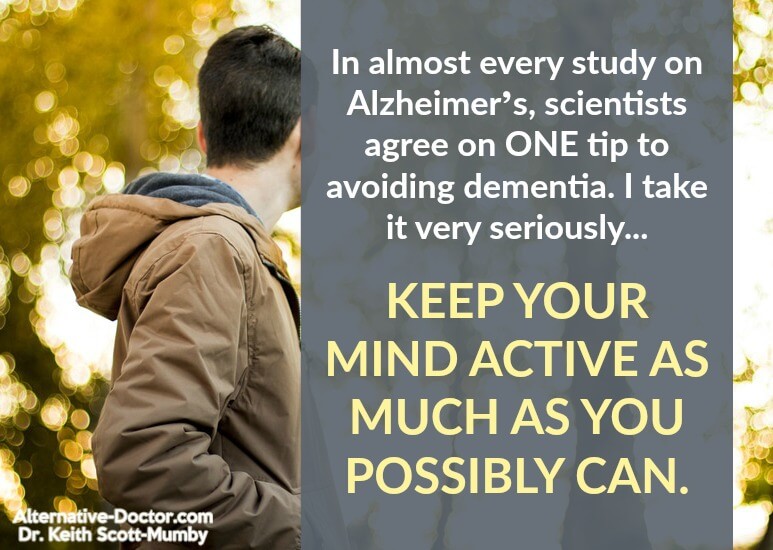 At my age, I have two choices and you have the same ones at whatever age you are right now.

You can bemoan the aging process.  It’s common to hear older people complain about all the things they “can’t” do.  They gradually make themselves depressed and bring on more ailments.  This option will make you feel miserable inside and out.

When you focus on every gray hair, every wrinkle, or every creaking joint, you make them seem far bigger than they are.  You start to obsess over every little thing going on (or not) in your body.  You’re more likely to blow minor issues out of proportion and think the worst about any ailment.

You can embrace (even celebrate) the aging process.  I’m a big believer in mind over matter and I absolutely know my positive thinking has helped to keep me in peak health for the majority of my lifetime.  I have earned every year.  I’ve tried to live them to the fullest.  I’m still here.  I’m still working, learning, growing, and doing.

Sure, there might be something now and again that I consider doing and then think, “Hmm, maybe not.”  It isn’t due to age so much as recognizing how much I have to lose (young people rarely think through all the possible outcomes).  On the other hand, I stop and enjoy experiences more as an older man than I did as a younger man.  I appreciate moments and people.  I see the importance of being “present” in my own life and the lives of the people who matter to me.

An age doesn’t mean you’re done, that you clock out of your life, and go home to sit in some recliner and vegetate on daytime television!  That will only lead to more negative thoughts!

There is living left to do!

In almost every study on this horrific neurodegenerative disease that affects more than 46 million people worldwide, scientists agree on one tip to avoiding dementia.  I take it very seriously and practiced even in my youth because it’s something I enjoy.

Keep your mind active as much as you possibly can.  Reading, writing, doing puzzles, playing mental games, and otherwise “working out” your brain will help to guard you from deterioration of critical tissues.  It’s why those people with high-thinking jobs and hobbies have shown lower instances of all forms of dementia.  High-level thinking is like circuit training for your brain.

Positive thinking, a nutritious diet, and flexing your “mental muscles” are the ideal ways to lower your Alzheimer’s risk factors!

The post Can Your Thoughts About Aging Create Alzheimer’s appeared first on Dr. Keith Scott-Mumby.