Do Your Jeans (And Other Fabrics) Contain Hazardous Chemicals?

Being married to a fashion designer, I get to hear things that most doctors wouldn’t know. Like the virtually unknown toxic jeans problem!

Today’s jeans, dyed with really poisonous cheap chemicals, are hurting the people who wear them. Do the manufacturers care? Of course not. Like the food industry, their only interest is making money and they will not stop short of killing and poisoning people.

Cheap and very toxic dyes rub off, are absorbed via the skin and do a lot of damage. The effect is much worse in the presence of moisture— when wearing new jeans you may even notice your skin has become dyed with the fabric color. If so, throw away this garment. Your liver does not like you wearing dyed jeans.

Don’t believe that chemicals in your clothes will just stay put. Even without rain or sweating, the fabric is rubbing up against your skin and chemical treatments will be absorbed. Don’t think for a minute that the skin blocks these substances; it does not. The skin is very absorbent: why do you think we have nicotine patches and hormones patches?

Anything on the skin goes straight through. Modern azo dyes belong to a group of chemicals that are notorious for doing just that.

So if your favorite pair of comfy jeans is next to your skin all the time, then it’s logical that what is in the fabric is as good as in your blood. Indeed, it IS in your blood. That means further assaults on your liver, which has to try and protect you from these alien chemicals.

Plus you inhale chemicals ex-gassed from new clothes and other fabrics. My wife and I bought a new mattress only this week and we are having a struggle accepting the chemical smell of the flame retardant, which is required to be there by law.

Colored dyes are particularly bad and if I tell you companies related to IG Farben, the German chemical giant, who grew fat on Nazi slave labor, developed them you can begin joining the dots. IG Fabren cooperated with the Nazis and openly manufactured the Zyklon gas, used to exterminate Jews and other “undesirables”. So don’t think that human “waste” or “collateral” bothers them. True to form, they have since given the world a tide of toxic drugs, via their successors Beyer and Hoechst.

IG Farben were originally a dye-company conglomerate; that was their initial reason to be. The beautiful intense modern dyes are synthetic chemicals, very far removed from the traditional clothing dyes, made from plants, berries, lichens, fungi and so forth.

In the nineteenth century, little regard was paid to the safety and of dye worker labor conditions. However, it soon became apparent that there were deadly risks to workers who manufactured chemical dyes and who dyed garments.

Even today, Japanese dye workers are at higher risk of tumors. And in the United States, deaths amongst factory workers exposed to dyes in their work suffer from several diseases, including cancers, cerebrovascular disease and lung disease at significantly levels than the general population – up to 40 times higher incidence, for some afflictions.

Today China has majorly taken over the garment industry and they have never been troubled by the slightest care for human safety—witness the scandalous episode of padding out baby milk formula with toxic melamine, just to increase profits. Only lawsuits and loss of profits would persuade them to do anything with safety in mind. 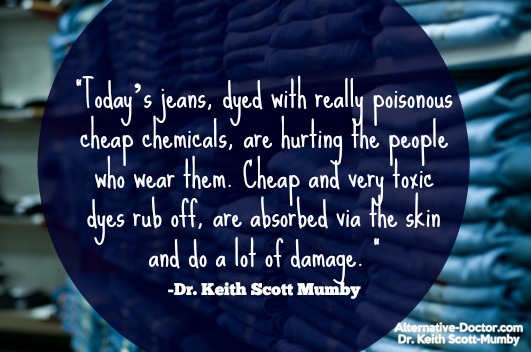 Greenpeace International actually commissioned an investigation that delved into the hazardous chemicals used in the production of high street fashions. They investigated a number of companies, including 20 global designer brands such as Armani, Levi’s and Zara.

The garments tested were designed for men, women, and children, and included jeans, trousers, t-shirts, dresses, and underwear, and were made from both artificial and natural fibers. The chemicals found in the fabrics included high levels of toxic phthalates and cancer-causing amines from the use of certain azo dyes.

In other words, a score of the world’s most famous brands are making and selling clothes containing hazardous chemicals which contribute to toxic water pollution where the clothes are made and washed Greenpeace considered this “unacceptable”.

Greenpeace International’s stand is more about overload on the environment, than individual exposures. “Many chemicals that are used in the dying and processing of fabrics can become hormone disrupting and even cancer causing when they break down in nature,” said Greenpeace’s Media Officer, Myriam Fallon, and those chemicals are being dumped into rivers right near the factories.

My concern is with the individual. As a physician who has spent around 40 years looking into the ways we each react toxic xenobiotic burdens, I have been aware of the medical impact of the clothes we wear.

In this I recognize the overload effects of dye fasts, mordants, stains resistants, non-iron, anti-wrinkles and azo dyes themselves. You may even find pesticides (permethrin, etc.) in fabrics.

Though it is not obvious from the label, the anti-wrinkle finish for example comes via a resin that releases formaldehyde, the chemical that is usually associated with embalming fluids or dissected frogs in biology class. The United States does not regulate formaldehyde levels in clothing, most of which is now made overseas. Nor does any government agency require manufacturers to disclose the use of the chemical on labels.

Other Chemicals in Dyes:

Formaldehyde is a particular problem. I think I remember in an earlier newsletter (many years ago) reporting one of my patients who would enter a clothing shop and by the time she had been in the store a couple of minutes she was so brain-disoriented by the ambient chemicals that she would forget why she had gone there in the first place. She would buy something cheap, like a pair of panties and exit quickly.

If you think this sounds a crazy story, just wiggle your nose next time to enter a fashion or clothing store and you will SMELL what I am talking about. But keep in mind that the majority of toxic chemicals today have no smell (intentionally perhaps, so they may go unnoticed?)

I tested the woman for sensitivity to formaldehyde and she was very, very sensitive to it. It quite deranged her thought processes. Imagine that same effect on a young child, who was trying to learn and pass study assignments! Yet formaldehyde is everywhere on fabrics, including clothes, upholstery, and carpeting.

Look good but have a care, that’s Vivien’s message to you all.

Be aware of the risks that exist in your clothing, that’s my message to you all. Remember my saying: the commonest cause of death is ignorance!

The post Do Your Jeans (And Other Fabrics) Contain Hazardous Chemicals? appeared first on Alternative Doctor Dev Site.