Apparently, Dr. Ronald Krauss, UCSF Adjuvant Professor and Director of Atherosclerosis Research at Children’s Hospital Oakland Research Institute, is really to blame for the horrible story, which all vegans and vegetarians are incensed about. It was a recent front cover headline by Time magazine: “Eat Butter”. They are calling him “Doctor Lard” (in derision).

The magazine had the temerity to argue there was no science for the value of a low-fat diet and, moreover, the feature article pointed out there was GOOD science to tell us about the benefits of eating saturated fats. The author, Bryon Walsh, is decried as a sloppy author (or worse).

Vegetarians and vegans, in my experience, are not interested in mere facts, which contradict their dogmas. All this repentance on fat is just a trick, thinks one vegan writer Dr. John McDougall, and recent headline articles, in the New York Times, the Wall Street Journal, and now Time magazine, he hints are a last ditch effort by the meat, dairy, and egg industries.

In fact vegetarians’ rejection of the overwhelming tide of evidence that has gathered is really THEIR last-ditch effort to try and prop up the ridiculous idea that animal fats are unhealthy for animals! 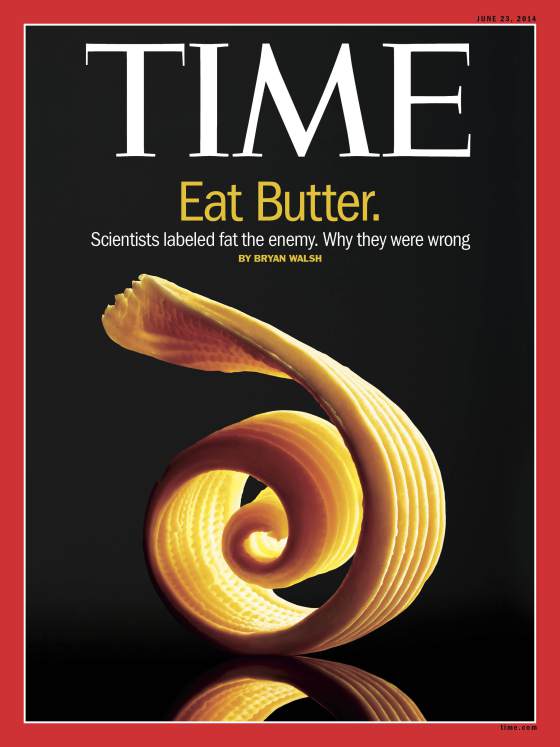 The leaders of the fat vilification campaign, which killed untold millions, who told us that the human diet should be based on plants (contrary to archeological evidence) and that butter, bacon, and Brie are bad for people are at last losing the battle. This includes writers like Dean Ornish (who I admire for his work but not his conclusions) and T. Colin Campbell, who I despise for his shabby, dishonest book “The China Study” (all his evidence rigged).  See this report.

The truth remains; I’ve been writing about it for decades: we need saturated fats in our diet, they make us healthy, we can’t function properly without these substances. Cholesterol especially is needed: it’s the basis of almost all our hormones. People with higher cholesterol levels live longer than those with super-low levels. Period.

All else is posturing and propaganda (and there’s plenty of that).

The Western world, through the power of US science and propaganda, has foisted us with what is, essentially, a crypto-vegetarian diet: protein-deficient piles of birdseed (passed off as “heart healthy whole grains” by the Food Industry pseudoscience machine).

Well, the time of reckoning has come. The whole ship of low-fat eating has crashed into a massive iceberg of scientific evidence, as one writer put it. The once-heavyweight nutrition opinionated leaders are scrambling for the lifeboats. It would be good if a few of them drowned in the Sea of Shame.

Because, unquestionably to me, there have been policy makers and supposed “experts” who have put truth and public health as a secondary concern, behind that of furnishing their own cushy careers. Why do I know that with such venom and certainty? Because there is absolutely no way any honest, intelligent, scientifically-trained person could not have been aware of the VAST corpus of evidence showing us that carbs kill; fats are healthy.

So I conclude they just wanted a comfortable, dishonest life, drawing a vast salary and letting the millions go to Hell and die young, because these officials did not have the courage to speak out. No-one wanted to rock the boat.

For 40 years I’ve been trying to make headway with my teaching about the value of good quality, animal-based fats (which in my canon excludes non-human milk). I want all my readers to be as healthy as possible for as long as possible and I want you to lead the charge with this shift of emphasis in our diets.

If you are overweight, you’ll be pleased. Carbs make you overweight; fats kill your appetite and you don’t eat so much, so you LOSE weight. Forget all those calories arguments: yes fat is 9 calories per gram, carbs only 4 calories per gram. But if you eat 2 teaspoons of coconut oil (I eat it straight off the spoon) and that kills your need to consume 300 grams of carbs, guess what happens! 90 calories vs. 1200 calories? Fat wins every time.

The only kind of fat you still have to worry about is the toxic stuff that’s found in farmed animals. These bloated, carb-stuffed miserable creatures from intensive-confinement animal farms are loaded with fat: up to 30% or even more, whereas wild animals rarely exceed 7% fat. They are bred and fed to be disgustingly obese, so the farmer makes more profit (feeding the animals grains to make them fat is far cheaper than turning them loose onto wild vegetation).

And YES, you should read that again: FARMERS FEED LIVESTOCK ON CARBOHYDRATES (GRAINS) TO MAKE THEM FAT. Why do that? Because feeding them on fatty foods makes them slim; they lose their appetite and don’t eat so much.

This one observation alone should tell you that the giant propaganda machine of the last fifty years is completely, stupidly wrong!

But it’s not just the presence of the fat in these food beasts; it’s the fact that inflammatory chemicals lodge in the fat. The “streaky bacon you get in the USA (streaks of meat mind you, not streaks of fat!!) is loaded with pesticides, herbicides, antibiotics, hormones and other xenobiotics which—once they get inside YOU—will set up severe inflammatory reactions.

So eating fat is cleared. But that doesn’t mean that all fat is good. Be aware of the source. We should probably all be eating seal blubber and shot venison. 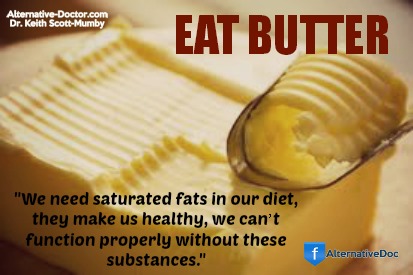