E-Cigarettes May Have Their Own Health Risks

In the pursuit of easier methods to quit smoking cigarettes, electronic cigarettes (e-cigarettes) roared onto the scene ten years ago. These devices are hand-held and run on a battery. They heat the liquid (a combination of oils, flavors, water, and so forth) to a vapor so it can be inhaled.

While countless studies have been done about the harms of cigarettes (after decades’ of unmonitored use), vaping was shockingly accepted without assessing possible long-term effects.

The vaping industry billed their own products as “safer than tobacco” despite there being no studies conducted outside the industry in an unbiased environment. Instead, all the reports that claimed e-cigarettes were safe were put forth by the very manufacturers of the pipes and liquids.

Over the past two years, stores have cropped up all over the United States that offer the vaporizing pipe and the flavored liquids used in them. Initially, there were no restrictions on who could buy these products and they’re unregulated online.

A funny side note is that the Federal Food and Drug Administration (FDA) approved all the liquids (around 7,000 by last count) for oral consumption not as an inhalant. I’d say that makes all the difference when it comes to a product inhaled into the lungs!

New Science and an Old Problem

One of the major reasons you need to quit smoking is the harm it does to your respiratory system. Your lungs are meant to inhale oxygen and exhale carbon dioxide. Introducing anything else to such a sensitive environment is a recipe for disaster.

Your lungs are fragile and you can’t live without them doing their job.

With vaping, you’re replacing one inhalant with another. There are no real federal regulations on the liquids or how much of the vapor is inhaled. There hasn’t been any research done into possible repercussions from second-hand vapor.

No habit that involves an outside chemical product is harmless. Whether it’s alcohol, cigarettes, marijuana, or vaping…you’re ingesting something that can be both “natural” and also “foreign” to the human body.

Your body does what it can to adapt and fight anything it considers a foreign invader but how much can it fight? If you switch from a half-pack cigarette habit (inhaling thousands of chemicals with every puff) to vaping (inhaling the vapor of unregulated liquids that are unknown to your body), what are you really changing?

The habit itself is the same. While vaping may have fewer chemicals or carcinogens, you haven’t “kicked a habit” so much as “replaced a habit” with something else.

As it turns out, those “vaping is safe” claims might have been premature. This is why products should be tested repeatedly by outside institutions so unbiased results can be reached. 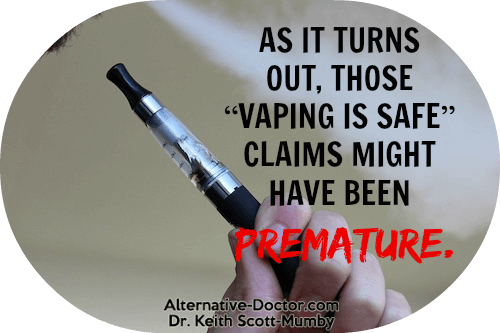 The University of North Carolina discovered that vaping may mimic cigarette smoking in a way that should come as no surprise to either the medical community or consumers.

They alter the gene expression of cells in the human respiratory system. This was well-known in the case of those who smoked cigarettes. Constant bombardment of this delicate tissue with smoke increased your risk of respiratory inflammation, viruses, and bacteria because it compromises your immune system. Vaping has many of the same problems.

Apparently, even the researchers were stunned by their results but I’m unsure why they would be. After all, the habit is the same and the delivery is similar. Both methods involve the lungs.

How could there be no effects to such a practice?

Professor of pediatrics, microbiology, and immunology, Ilona Jaspers, stated, “I was really surprised by these results. That’s why we kept going back to make sure this was accurate.” The lead researcher went on to add, “We honestly do not yet know what long-term effects e-cigarettes might have on health.”

They compared smokers, non-smokers, and vape users. The non-smokers/non-vapers were considered the control group. They used the tissue lining the nose since it’s similar in biological makeup to the human lung. The final outcome? Fascinating stuff.

Jaspers clarified, “We compared these genes one by one. We found that each gene common to both groups was suppressed more in the e-cigarette group. We currently do not know exactly how e-cigarettes do this.” She went on to add, “We know that diseases like COPD, cancer, and emphysema usually take many years to develop in smokers but people have not been using e-cigarettes for very long. We don’t know yet how the effects of e-cigarette use might manifest in 10 or 15 years.”

Ladies and gentlemen, I’m willing to hazard a guess and it isn’t positive.

I become very frustrated when products are rushed to market without long-term studies regarding human health. This is another in a long line of bad ideas.

If you want to quit smoking, you have to go all the way. I know the habit is hard to drop and I know finding a “replacement” is tempting to ease the stress of it.

Right now, we don’t know the full impact of vaping on human health but this is the first in what will likely be many studies showing it isn’t as harmless as you’ve been told.

You can quit smoking and get your body back to where you need it to be. It won’t be easy but in the long run, it will be easier on your body than what amounts to inhaled poisons.

It doesn’t matter whether it’s delivered as a smoke or a vapor.

The post E-Cigarettes May Have Their Own Health Risks appeared first on Dr. Keith Scott-Mumby.