How to Detox From Chemical Pollution

Last week I promised you I’d follow up on the problems of chemical pollution with advice on how to deal with it.

Some of this you will already know and some you don’t. But repetition is a good thing; it brings certainty and fluency of knowledge. We could call it health literacy. That’s a key concept because in this day and age, with all the hazards we are exposed to, health illiteracy can be a very dangerous thing.

As I said over and over and in my book How to Live Beyond 100 Years… JUST STAY ALIVE! Things are changing so fast and soon we may not need to age and die. I don’t want you to check out just before all these discoveries come along and change the rules of the game of life!

OK, enough of that. I promised you notes about detoxing; let’s do it.

Forgot to Mention This…

First let me add something I never mentioned last week. It’s scary knowledge about just how these toxic chemicals spread around. You’ve heard me say, of course, that effluent gases from Chinese power stations are coming ashore in the western USA and can be found contaminating birds, trees and plants as far inland as Payson, Arizona.

That’s just prevailing wind dispersal, you will think, and you’re probably right. Satellite photographs show streams of pollution crossing the Pacific, west to east. It’s called “brown aerosol” and there is no doubting it. But what’s more scary is a study quoted in my 1993 book The Complete Guide to Food Allergies and Environmental Illness (Thorson’s, London, 1993). Tagged chemicals released in Paris were picked up all over Scandinavia within 24 hours of being released. That’s not wind; it’s a natural process of spreading we call diffusion. It’s staggering how fast it works to spread bad stuff.

That’s why eskimo mothers are feeding their infants with breast milk contaminated by chemicals from temperate zone industries and forest fires all over the globe.

It’s really bad out there, as I said last week!

Are You In Overload?

First of all, suspect the problem. If you don’t have it in mind, you won’t find it. Suspect chemical intolerance or overloading when you develop the following signs:

Does the idea of a “lift” or buzz from chemicals sound crazy? Why should it? Think about glue and solvent sniffers. They do it on purpose – but just because they are too stupid to realize the dangers that doesn’t mean it is not pleasurable brain stimulation.

Why would someone develop chemical intolerance?

Over the years, I learned of at least four reasons a person becomes chemically sensitive. Others may come to light in time:

Once intolerance to one chemical substance is established, it tends to spread rapidly to other substances. We call this the spreading effect.

There are two aspects to this:

You must do both, otherwise the problem will just come back!

You need to go through the house and garden, plus the office workspace if you have enough control over it, removing all obvious chemicals. Think of solvents, cleaners, cosmetics, scents and perfumes, color fast treatments to fabrics and carpets, plastics, medicines, photocopying, paints, wood paneling, insulation, glues and so on…

My old trick was to have the person go through their local environment, sniffing!

Scott-Mumby’s Rule Of The Nose: I have a maxim, based on decades of experience, which is that if there is enough substance present to cause an odor, there is enough to cause symptoms. Some chemical substances, of course have no odor.

Don’t forget food too. Most of it is loaded with stuff you don’t want in your body. Eat as much organic as you can and in so far as you can believe the claims that a food is truly “organic” (a lot isn’t). 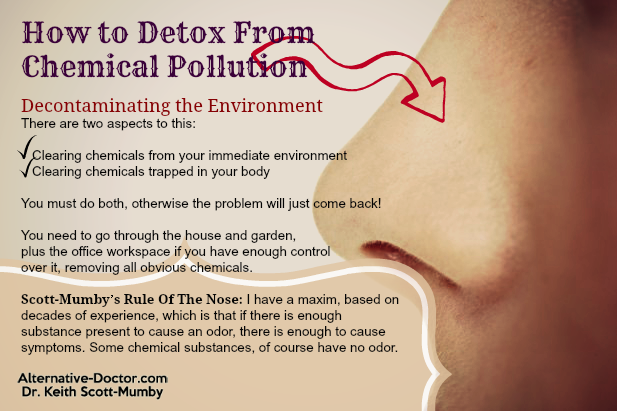 Getting the stuff out of your body is crucial but it is not without hazards. When you start a proper detox program, of the kind I am about to outline, you will start mobilizing many chemicals trapped inside your body.

Sometimes it pours into the blood in sufficient quantity to cause symptoms. You don’t want to push it that fast if you can help it (I’ve seen people go into a psychedelic trip, due to drug substances he or she had not taken for decades). It’s kind of weird; but not if you remember that most pollutants are fat-soluble and will be found in your adipose (fatty) tissues.

It’s important to get it out because we now know, for sure, that toxic chemicals in your belly fat is the main things that makes belly fat so dangerous that it could kill you, via inflammation, heart attack and stroke.

I suppose I’m going to have to write a proper detox manual some day! Anyway, for now, this is what you need to do, after cleaning up the sources of pollution.

This is a number one. You need to sweat plenty; that’s the key. There are 5 main excretion routes: lungs, skin, liver, gut and kidneys. All are valid but skin is a good one, because skin is our largest organ.

You can buy fancy Scandinavian wooden saunas. I advize you not to: they are chemically contaminated too. Think of the stink of pine wood (terpenes). In fact I often point out that all our modern chemicals come from wood terpenes! From ancient forests, via petroleum deposits and modern chemical refineries. Surprise!

Get the kind where you can heat up your body but your head remains clear. Today this is rapidly becoming a must. As genetic profiling comes down and down in cost, everyone needs to know if they have impediments in their detox pathways. If you do, it could be deadly, if you don’t know about it.

If you can’t methylate properly for example, you’re in trouble in a polluted world. But you can help restore the process somewhat (MTHFR gene), by taking folic acid, B6, B12, SAMe etc. That’s epigenetics.

It’s our number one rescue molecule. The trouble is for every molecule of toxin removed, we lose a molecule of glutathione. This is where the madness of claims that all nutrients we need will come from a “balanced diet”! In today’s toxic world we need 1,000 times the amount of detox agents in our bodies. There are hardly any nutrients at all in the modern diet; but certainly no provision for detoxing.

Our most faithful and helpful detoxer. You can’t be without it. Linus Pauling says 2 grams a day…. Laughable! We need 10 grams a day at least in the 21st century (goats, as an example, make 12 – 15 grams a day for their bodies).

We really need them to protect us against free radicals, which make everything I have written about orders of magnitude worse. There are arguments about whether we need antioxidants. There has never been any argument that we need copious nourishing fresh foods, especially the highly colored ones.

Take a Good Multivitamin and Mineral. My own preference is quite simple: I take a liquid formula, Passion4Life, from my good friends Charles and Linda Van Kessler.

It’s good to hedge your bets and make sure no deficiencies creep up on you.

This isn’t just about solvents, pesticides and pollutants. Toxic heavy metals too are wildly dangerous and are accumulating in the environment, so every year our burden goes up. That’s something else that would need an entire newsletter—and some—but for the moment let me recommend you to go here, where nutri-geek Christopher Shade has the best stuff on the market for metal detox, plus comprehensive testing.

Metals are mainly excreted via the liver and gut, so his main product is called Intestinal Metal Detox.

You need to get this fixed too. It’s absolutely crucial you do it in the right way. Here’s an audio I did several years ago that should help you make good decisions:

You know, I’m running out of space, so maybe there will be a part 3! What do you think? There is still plant and EDTA chelation, cilantro, chlorella, zeolite and clay, EMF hazards, which can be an important part of any detox protocol

There is certainly plenty of information here to be going on with. It should help your “health literacy” grow by leaps and bounds.

The post How to Detox From Chemical Pollution appeared first on Alternative Doctor Dev Site.