Marijuana Use Last Word and a Postcard from Athens!

Here’s Vivien at the Temple Of Hephaestus in Athens. The building is pretty ruined but Vivien is timeless and lovely! 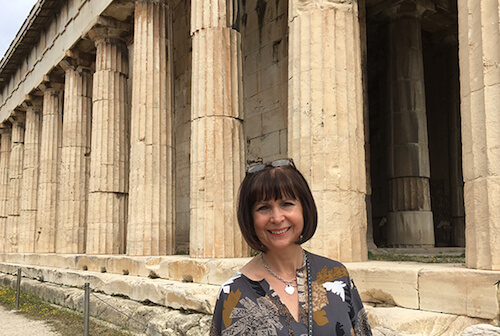 I’ve been called a liar. The F-word (again!) The topic of marijuana, like the one on alcohol, has really brought the flies crawling out of the furniture.

There are laughable individuals who claim to know more than me, by “researching” on Google! As if that counted for more than clinical experience.

There is no comparison between offering drugs for pain and solving the origins of the pain. The ONLY sensible medical strategy is to find and eradicate the reason the person is in pain in the first place.

As I said in last week’s piece: all pain is inflammation. Get rid of the inflammation and the pain goes. You won’t find any peddlers of dope making this point strongly though. They don’t want you cured, any more than Big Pharma is looking for real cures!

They just want profits: money, money, money. Follow the money. There you will find the fake science to justify it all.

Look, here are the two important points that peddlers of dope and marijuana users cannot get around:

1. Any medicine or remedy you need to keep taking, on a daily or frequent basis, IS NOT WORKING BY DEFINITION! I’ve been writing that since the 1980s. It’s just as valid a criticism of so-called holistic remedies as it is of orthodox medicines.

It’s great for profits and, trust me, dope peddlers want profits. The patient has to buy and re-buy, over and over. He or she is hooked on your dope, instead of the Big Pharma dope.

The point is, if the remedy worked, you’d stop taking it very quickly. Symptoms gone; no further problem. That doesn’t happen with dope, so it’s worthless.

2. Any medicine which hurts or kills a significant percentage of patients is VERY BAD. These sanctimonious hypocrites don’t seem to care about collateral damage to some individuals, as long as their prejudice is upheld. Yet they will yell and rail against Big Pharma for selling it’s drugs, which do harm.

I’m pleased to report many people upholding my position, as well as the poison-pen subscribers.

My good friend Blaise, a professor of math and as smart as paint, sent me this:

“Yeah! Tell it like it is Dr. Keith. I took an herbal class by a certified teacher in the American Herbalist Guild, and Cherokee herbalist. It was pointed out that marijuana was disparaged in Cherokee medicine as being “a trickster”.”

Another dear friend, a very famous actor, who was taking Vicodin for hip pain, wrote me this:

“I get my Medical Marijuana Card through the state, all nifty and legal. Oy! I smoke a joint and wait…nothing. Same pain. Smoke some more…still nothing. Well, I say to myself, that didn’t work so I’ll just drop [take] a Vicodin. Double Oy! After the Vicodin married the marijuana, I sat on the edge of my bed for four hours focusing on breathing while my dear wife begged me to go to the ER. I knew that I was close to death but I’m stubborn. Anyway, I made it through but I do wonder when I hear the figures how many overdose deaths occur because of the effects of the combination of those two chemicals about which most of us know nothing?”

A good point. Remember, we have lost a few celebrities on mysterious opioid overdoses.

There is just too much we don’t know about dope, as Blake says in his account:

“I agree that medical marijuana can be quite dangerous. My normal blood pressure of 115/60 shot up to 200 over 90. I woke up in the middle of the night and when I took my blood pressure, I said that couldn’t be right but it was. I also lost all muscular coordination and my body totally collapsed like a rag doll falling over. It took me about two months or more to totally get rid of the shakes. [That’s pretty heavy, you’ll agree? Prof. Keith]

I was told by an MD that it was not addictive and that it couldn’t hurt me. I had several bad reactions to it but when I lost all motor control and with the blood pressure and a visit to the ER, I decided that someone wasn’t giving me accurate information… And no one pushing it wanted to talk to me. So all I know is that had I fallen in a less safe place…. like on the stairs, or while showering, because there was no warning, it could have greatly damaged me…

I did an Internet search and I found lots of people describing exactly what had happened to me, and yet the local club and doctor’s office [refused to acknowledge there is a problem].”

If you are blind to these reactions, you are stupid and that does not make me retarded or out-of-touch, as these apologists for dope have claimed! I am very much in touch with the truth, rather than the propaganda that’s everywhere.

Andrea from Australia has this to say:

“Hollywood has a lot to do with [this], always going on about how good it is to be stoned out of your nut on something, anything. No wonder I feel so alien, not being interested in taking pills for anything, not getting any more jabs (pity mother didn’t figure this out before I was born). I’m seeing the messages Hollywood promotes, from the economy to illegal drugs, it’s been drummed into me since we first got a TV. Most people don’t see it.

And I’ve already told you about family and friends who are ready to put up with all their aches and pains and drugs in order to eat what they want. Mother and I are the only ones I know who believe in changing diet to improve health, and even she won’t cut out potatoes, even though she’s complaining lately about a bit of rheumatism. WE are not normal, the pill-popper is the norm; it’s ingested with the baby formula.”

And one more quickly, from a Chinese herbologist:

“Great to see someone with influence speaking up about the other side of pot.” 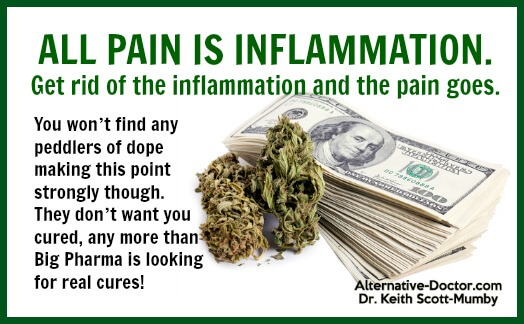 One silly woman, going off the topic (broadening her attack on me), dared to say I obviously knew very little about autism and vaccines either. Oh really? Actually, I was the first doctor in the world to comment on the emerging relationship between autism (disintegrative psychosis as we used to call it then) and measles vaccine. This was in the early 80s. I braved many a storm, speaking on TV and radio, to make this known to parents and to fellow doctors.

What’s more, I successfully (even, you might say, spectacularly) treated hundreds of cases referred to me. I was, at one point, the world’s number One, I should think.

But try telling people with venom, spite and bigotry what the truth might be! They don’t want to know. Our times are now officially called the “post-truth” society, meaning prejudice, opinion, emotion and Facebook “likes” etc. count for more than accurate, meaningful knowledge.

More’s the pity. To your real health, not some imaginary drugged-up improvisation of it!

The post Marijuana Use Last Word and a Postcard from Athens! appeared first on Alternative Doctor Dev Site.