My Thoughts on Human Life Expectancy & How Robust Is The Human Body?

Do you ever stop to think much about your body? Apart from women who are fighting aging—and therefore pretty hostile towards their bodies—most of us take it quite for granted, I think.

Well, you might have had a startling wake up a few nights ago on British television (Channel 4)! Vivien and I were surfing TV in the hotel bedroom and came across a program called “Naked Attraction”.

It was a dating game in which contestants choose each other but with one special catch: they had to strip stark naked in front of the cameras. The launch program showed a girl reviewing each of six naked men. And I do mean naked… not a stitch of clothing. She had to eliminate four, after being dissatisfied with certain points.

Then SHE had to strip naked, while she chose from the last two. Naked, for a switched on young woman these days, means a shaven vulva, all pubic hair gone. And that’s what we got. There were no tricky camera shots… we saw it ALL.

Now I’m no prude, as you know. I’ve seen inside women’s genitals, never mind the outside! But I must admit my jaw dropped that they were doing this, before the watershed hour. There was no prudish blurring, like on Japanese or US television. You could see whether the men were circumcised or not. 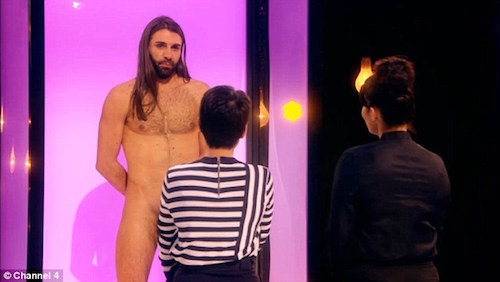 Debating the finer points of this guy’s anatomy!

Predictably there was a furore the next day. The press erupted with accusations of “pornography” and of leading children astray—the whole nine yards of puritan disgust, thrown at the rest of us, as if it was a matter of law. There were calls for resignations and the program to be taken off air immediately.

One stupid (male) reporter claimed it was choosing a partner by genitals alone. That shows his state of mind. Any intelligent woman could also review a man’s posture, physique, muscle tone, manners, warmth of voice, skin color, quality and health of skin and many other subtle signals, each of which would attract a woman, over and above penis size. In fact, I have found organ-size more of a male obsession (call it paranoia) than a women’s thing.

I thought the program was fresh and amusing, for one viewing at least. I doubt many people would bother to watch beyond one or two episodes. What’s the problem? It was not dirty, except in the viewer’s mind.

We were born with naked bodies—it’s natural. My subscribers are into “natural” and I wouldn’t like to think of anyone on my list being upset by this. You can’t want herbal alternatives, yet insist that breasts and penises are somehow “wrong”. The muddled Christian view that God is perfect, but got it wrong when it came to sex and body parts, is so foolish as to be irrelevant.

I suspect that all the complainers were simply not comfortable in their own bodies or with any hint of sexuality if it isn’t hidden from view. The rest of us are bored with puritanism.

The whole thing reminded me of a recent encounter with womanhood in South Africa. While there, Vivien and I were taken to visit the Cradle Of Humankind. We all know the story of humans “walking out of Africa”. The region near Pretoria is still ground zero, where they are finding older and older human remains. Our origins now go back some 3 million years.

The exhibition is very good but one display was particularly arresting! The reconstruction of a woman, sensitively done, but she looked frightful—or more exactly, frightening. 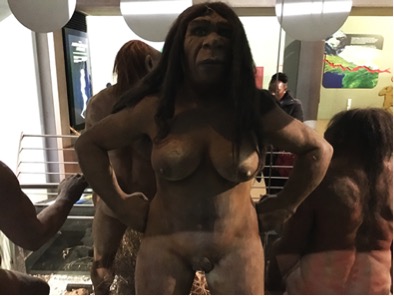 Imagine meeting this at a disco! The real question is: would she win a date on a naked TV show? It’s all about nature and selection, isn’t it. The robust and attractive specimens will mate and produce more offspring like themselves and so grow in proportion. This lady and our distant ancestors like her gave rise to the river of Humankind and that includes all of us reading this.

We should adore and admire her. Thank you, Mother of Mankind. As a flippant comment, I would say she’d look daft in black panties and a dress, wouldn’t you? Naked is OK by me.

How Robust Are We?

I’m risking becoming a pot-pourri this week, but I’ll try and keep the threads connected. Last night, I sat with friends over a bottle of wine and I was trying to explain the life-potential of humans. In the Cradle of Mankind, the average human life expectancy would have been very little over 20 years.

But today we can potentially live beyond 200. I called my host’s attention to the story of Khfaf Lasuria, a woman living in Georgia (old Soviet Union). In the early 1970s a Harvard University professor, Dr. Leaf MD, had studied her history and was sure she was at least 130 years old and sure she was not more than 140 years old (published in Jan 1973 edition of National Geographic).

I was so disgusted, I pointedly got up and left the room. But that meant he missed the best part of the story: this woman actually died in 2012! She lived another 39 years! So she was definitely at least 169 years old and definitely not more than 179 years old, according to Professor Leaf’s investigation. Remember, Georgia is a Christian community, with quite good births, marriages and deaths records. 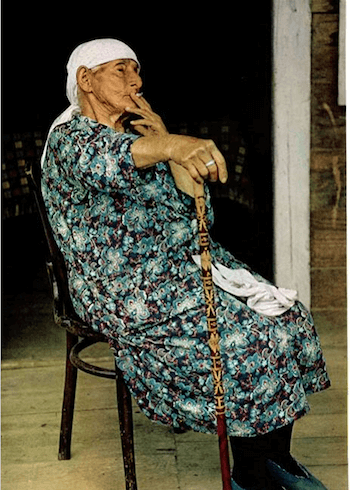 Khfaf Lasuria in 1973. She drank vodka every day and smoked habitually!

Remember that when you hear or read stupid underperforming “journalists” and doctors, who say people cannot live more than 120 years… therefore they don’t. All stories that conflict with this position are simply ignored: the person must be mistaken or is deliberately making fraudulent claims, they say. This history has a proper paper trail!

As I explained in my book “How to Live Beyond 100 Years”, human life expectancy is steadily rising (despite so many couch potatoes). Leonard Hayflick ignores this inconvenient fact and still insists that we can do nothing to extend our lives. He’s famous for the “Hayflick Limit”, named after him, which says our cells can only divide 50 times, then we die.

He’s wrong and all he actually proved was that his knowledge of nutrition (to keep the cells alive) was inadequate. But even if we DID only get 50 cell divisions that could easily be translated, with care, to an average age of 300 years. An average age of 300 means some will die at 100 years and some will live to 500 years or more!

The key part of what I said is with care. We have to look after ourselves. The illusion of age meaning crumbled and crippled is FALSE; it has been given that appearance in the past by people who did not look after themselves.

Khfaf Lasuria in no beauty, as you can see: but she could walk, talk and laugh normally at the age of at least 130 years. Her conversations with the researchers were recorded in the National Geographic article. She was working full-time in a tea factory till the age of 111 years, when she retired! We have folks in the USA that can barely stand up at the age of 55. Go figure.

That link again, to learn more about staying healthy and non-crumbly into old age go here: “How to Live Beyond 100 Years”.

The post My Thoughts on Human Life Expectancy & How Robust Is The Human Body? appeared first on Alternative Doctor Dev Site.