Noise pollution is something our ancestors probably never dreamed would be an issue. The modern world is flooded with noise…and it might be affecting you in more ways than you realize.

The Soundtrack of the Modern World

Think about the course of your day, the sounds you hear, the “white noise” that plays in the background of your life – much like a soundtrack but not as interesting.

If you work in an office, chances are, you are inundated with the sound of printers, phones, computers, and talking. Every time you make a phone call, you listen to music or an extended advertisement about products and features while on hold or you’re reminded that an operator will be “right with you.”

Noise pollution effects are far worse if you work in manufacturing, mining, landscaping, construction, and transportation, which is the cause of hearing loss in more than 30 million American workers, according to the Occupational Safety and Health Administration (OSHA).

After work, is there a lessening of the noise? More than likely not. Like most people, you may stop at the grocery store, the mall, or go to a restaurant. How many bars and restaurants feature multiple televisions, loud music, and people shouting over both? There seem to be few things louder than an arena during a sporting or concert event.

Once you make it home to “relax,” your computer, MP3, phone, video game system, and television (probably complete with surround sound) are there to relieve the silence. Every appliance is equipped with a “beep” or a “buzz” to alert you that it has finished a job and that doesn’t include the truly “noisy” appliances such as hair dryers and vacuum cleaners.

Noise…twenty-four hours a day, seven days a week, every day of your life. Those who live in urban areas are most at risk for noise pollution effects. The ever-increasing population, noisy technology, more cars on the road, and close quarters result in little time without noise.

Even in sleep, you might hear traffic, neighbors, or leave your television on because it “soothes” you (or drowns out the “other” noise).

More than 100 million people suffer from excessive noise pollution resulting from transportation near their home (buses, trains, highways, and planes), according to the U.S. Environmental Protection Agency (EPA).

Rural inhabitants are not immune since more than 75% of farmers have some level of hearing loss as a result of loud farming equipment.

The World Health Organization (WHO) estimates that 120 million people suffer from hearing loss as a result of “secondhand” noise – defined as noise that a person doesn’t create but is forced to endure because of proximity.

Experts have related noise pollution to poorer quality of life. If the environment outside your home is chaotic with noise, you’re less likely to enjoy activities out of doors. 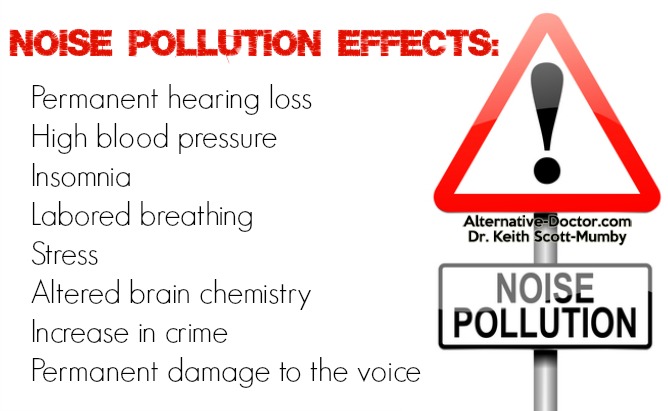 Why should you be worried about how much noise you’re exposed to in your life? First, hearing loss is irreversible. Though you can slow further hearing loss by making changes, you can never regain the hearing you’ve already lost.

Children are not immune to any of these effects of noise pollution but it gets worse!

Pregnant women who endure too much noise may be causing hearing loss in their fetus. According to a study published in Pediatrics, excessive noise during pregnancy also causes growth and developmental problems.

The Environment and Behavior journal published the results of a “noise study” on young children. Their school building was located near an elevated train track. Some students were kept in standard classrooms while attended classes that had been somewhat “soundproofed.”

Those students in the quieter environment were ahead in reading skills and grade-point average in comparison to the students in standard classrooms. Since that initial research, dozens of trials have been conducted with the same result: too much noise can interrupt the ability to learn.

Experts suggest that classroom decibels (measurement of sound) do not exceed 35dB – similar to what is acceptable in a library. Random investigations of classrooms in Germany found the average decibel level to exceed 65dB – which results in hearing loss over time. United States hospitals measured an average of 95dB to 110dB in a similar survey.

Adult productivity dips by 66% if there is outside noise while reading or writing, according to the British Journal of Psychology.

There are times that certain noise can be a good thing.

When London transportation officials began playing classical music in a high crime underground station, robbery and assaults on staff fell by more than 25%.

Knowing When to Say When

Teenagers are in the highest risk group for hearing loss due to the use of headphones, keeping music and other entertainment at maximum levels, and their inability to police themselves.

Controlling the noise pollution in your own environment is critical to overall health. Hearing loss is a well-known side effect but added burdens of cardiovascular disease, lower productivity, increased stress, and the impact on learning are even more concerning.

The soundtrack of your world… do what you can to turn down the volume.