The Dangers of Sugar – Worse Than Believed

In our modern world, there are few ingredients as dominant and dangerous to our food supply as added sugar. I’ve spoken at length about the dangers of sugar (as have countless others in the medical and scientific community) but it seems we’ve underestimated the devastating effects.

You read that right. As much as we’ve railed against sugar, we should have yelled a lot louder.

To be fair, sugar is delicious. Food manufacturers add it to just about everything. The sugar in bread, canned vegetables, and lunchmeat are just a few foods you wouldn’t consider “sweet” but are packed with the stuff. They do this because they know we love it.

It goes beyond love, of course. It’s a verified addiction.

This isn’t about calories or weight gain. For decades, these two factors were considered the only dangers of sugar that the average consumer needed to worry about.

Now, let’s be clear: there’s a direct and irrefutable link between sugar consumption and obesity. Obesity (in turn) is linked to diabetes and a host of other serious diseases.

By necessity – since two-thirds of American adults are overweight or obese – most research has stayed solidly focused on the weight gain aspect of sugar and the jump to other illness.

What if you’re one of those people who maintains a healthy bodyweight despite all the sugar you eat and drink? Perhaps it’s not the most common scenario but one that clearly exists.

New research released by pediatric endocrinologist Robert Lustig explains that you may show no weight gain at all with excessive sugar intake. You might look just fine on the outside. Meanwhile, your insides are in serious distress.

The struggle over the last decade for doctors such as myself is trying to explain that not all calories are equal. 100 calories in the form of fruit is not the same thing as 100 calories from a soda. Your body shows you this through illness, poor sleep, inability to concentrate, and other side effects that are too often misdiagnosed as something else entirely.

We’ve become a world that ignores what the body tries to tell us. While we pay closer attention when health is impacted by known toxins such as alcohol or tobacco, we still overlook sweeping proportions of our DIET.

A book called Alcohol: No Ordinary Commodity (published in 2003 by psychologist Thomas Babor) discussed the regulation of alcohol based on its effect on human physicality.

He and his colleagues established four criteria that are considered the gold standard for public health organizations today. See if you can spot the similarities between alcohol (regulated) and sugar (unregulated).

Within the past forty years, sugar has become far more accessible than alcohol. It’s literally in almost all refined and processed foods and drinks.

“Nature made sugar hard to get; man made it easy,” the medical journal Nature.

Every day, a vast majority of populations in developed nations consume 500 calories in added sugar alone. In the United States, the average is 600 calories of added sugar daily (the highest in the world).

Your body simply isn’t designed to process so much. The results to your body are undeniable and have been proven repeatedly by doctors and scientists globally.

It isn’t a theory. The toxic damage of long-term sugar abuse is fact.

Refined sugar offers your body zero nutrition, can actually rob you of the nutrients you already have in your system, and makes it harder for you to absorb nutrients from other sources.

Yes, it provides energy but the sugar from a piece of fruit will always offer your body more nutrition (that lasts longer) than the sugar in a can of soda or a candy bar. It doesn’t sustain you. Your body burns simple sugars fast, leaving you depleted (even lethargic) unless you repeat the cycle with more sugar. 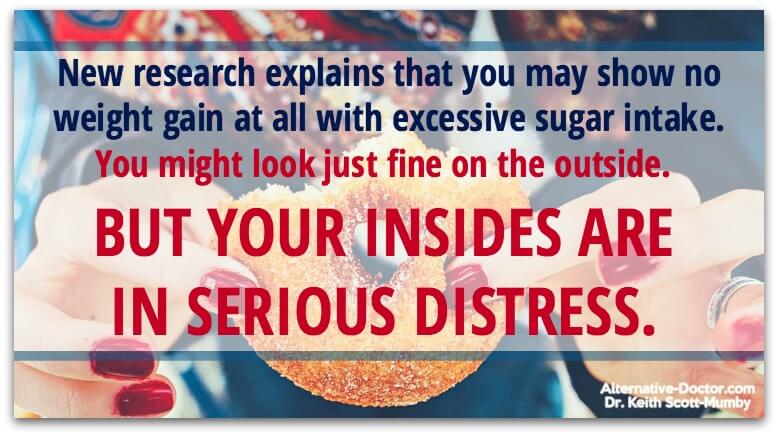 The reason sugar and obesity are so often linked in the media is the rising cost to society. The way we eat (and lack of exercise) has led to an unbelievable two-thirds of Americans being overweight and obese. It’s the dangers of sugar writ large, in flashing neon letters!

Obesity is considered a public health crisis by the U.S. Centers for Disease Control and Prevention (CDC) and the World Health Organization (WHO) calls it a global obesity epidemic.

This results in illnesses and conditions that present a financial crisis as well. In 2008, the United States spent around $147 billion for problems related to obesity such as metabolic syndrome. Naturally, the sugar trend (and availability) gets worse all the time.

Imagine how much higher that number is today.

Sugar is cheap, easily available, and delicious. It’s hard to quit it entirely and some struggle with it even after they’ve been diagnosed with a serious disease. Unfortunately, it’s in so many products now…you’re going to have to do the hardest part yourself.

The dangers of sugar are real. We learn more about it every year and the news is never good (and it’s never going to be good). Artificial sugars have their own serious problems.

Sugar isn’t a nutrient. It should never advance beyond a “treat” consumed in moderation.

Cutting back is a necessity if you can’t eliminate refined sugars entirely. Take it one food at a time, cutting back or eliminating what you can. Stick to it and once you detox from this devastating additive, you’re going to feel better than you have in a long time.

You can break the cycle of sugar abuse. You must to take control of your health.

The post The Dangers of Sugar – Worse Than Believed appeared first on Dr. Keith Scott-Mumby.