Why Artificial Sweeteners Could Raise Your Blood Sugar

There have been decades of negative information about the side effects of artificial sweeteners regarding being cancer causing and completely toxic to your body.

Artificial sweeteners have been linked to…

As if that wasn’t bad enough, there is new evidence that the two conditions they were thought to help control is actually worsened by their use!

Doctors and nutritionists alike have suggested artificial sweeteners in place of (natural and refined) sugars for diabetics as well as those trying to lose weight.

In a new study published by Nature, scientists at Weizmann Institute discovered that aspartame leads to glucose intolerance! Researchers gave laboratory mice the comparative maximum dose allowed in humans by the Federal Food and Drug Administration (FDA) and the control group was given straight glucose in water.

After 11 weeks, the mice receiving the artificial sweetener showed “significant glucose intolerance” compared to the control group mice. They repeated the experiment several times, using different mice and their results were the same. They also found evidence of specific bacteria linked to obesity in humans.

This chemical toxin is found in abundance in “diabetic friendly” and “low calorie” foods!

Artificial sweeteners may not have any calories but that is the least of your worries where these supposedly “harmless” substitutes are concerned. The reason they don’t register calories is due to the fact that your body is unable to digest them.

Think about that for a moment.

You can’t process these unnatural sweeteners because your body can’t even identify what they are and considers them a contaminant that should be flushed from your system!

The team with Weizmann theorized that gut flora is directly impacted by sugar substitutes. We need beneficial bacteria such as lactobacillus and bifidobacterium in order to keep our bodies in optimum condition. They directly influence digestion, metabolism, and even brain health.

Without them, your system begins to break down from the inside out.

To test the possibility, they reviewed the data of almost 400 people who regularly used artificial sweeteners and found a strong association to their levels of glucose intolerance.

Taking their theory a step further, the scientists asked seven volunteers who never used artificial sweeteners to consume the maximum allowed for one week. By the end of the small experiment, four of the participants showed a substantial drop in glucose tolerance and measurable changes in their gut flora.

Yes, additional research will now have to be done to confirm (and larger studies done on humans), but considering the known problems caused by these chemicals already, how much more evidence do we need? 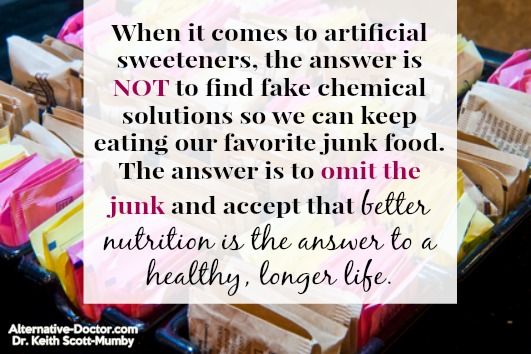 The developed world admittedly consumes too much sugar. It is the root cause of the obesity epidemic, the explosion of diabetes cases, and is undeniably linked to cancer development.

When substitute sugar was introduced to the market – at an estimated 20,000 times sweeter option with no calories – doctors and nutritionists worldwide encouraged their use. Food manufacturers started putting it in everything from sodas to bread.

Decades later, we’re faced with the consequences. The answer is not to find fake chemical solutions so we can keep eating our favorite junk food. The answer is to omit the junk – as much as possible – and accept that better nutrition is the answer to a healthy, longer life.

You might love the taste of sugar and the substitutes marketed as a “healthier” option. Your body doesn’t love it. Your body sees these products as toxic invaders that are dangerous to you. That leads to an immune response and inflammation.

Inflammation is the basis of so much sickness and disease around the world and that is the ultimate side effect of artificial sweeteners. Body-wide chaos and a state of alert that throws all your basic systems off balance.

When you crave something sweet, choose fruit! Natural fructose (sugars) in fruit don’t overwhelm your body and these foods provide fuel for your beneficial bacteria.

If you love your coffee and sugary treats, consider using raw, organic honey instead of the refined white sugars. It is naturally antibacterial, antimicrobial, and anti-inflammatory…while still being sweet and delicious! None of those artificial sweetener side effects to detract from your enjoyment of an occasional goodie.

Whenever possible, choose raw and natural – your gut flora will thank you. Check out my article on the 5 Ways to Keep Your Intestinal Flora Healthy here.