Encounters With The Humble Potato

I have a talk/lecture I trot out from time to time: FOODS CAN REALLY HURT YOU. In fact foods can put you in bed for years, keep you crippled for life (unless someone comes to the rescue), and work serious mischief that I can guarantee 99.99999% of doctors, chiros, DOs etc. will miss.

Because they really haven’t got the message. Foods can really hurt.

We are so used to the concept that foods nourish our bodies, it’s a real shock that many foods are not so friendly.

Oh sure, everybody knows that red beans need cooking long and hard, otherwise the whole family can end up in the emergency room. Everybody has heard of the nightshade family of foods… gluten sensitivity… casein allergy (except for raw milk, which doesn’t have any casein in it, obviously… PLEASE: I’m being ironic! Don’t write to me and tell me that there is casein in raw milk. I know that. Most of the world knows that. But the raw milk loonies believe nothing bad can come of raw milk, so long as it isn’t heated and so it can carry TB and Brucellosis!)

OK, I’m getting snarky. But honestly, the baloney out there is disheartening for someone who knows the score. And I DO know the score. I’ve been working this game for over 40 years.

Any food can do it. I’ll repeat: ANY FOOD. To listen to the ravings of self-styled experts you’d think it was all gluten and grains, or all lectins, or all animal products, or all GMOs. Not one of these “experts” has sat in front of 10,000 people and listened—really listened—to their stories and what they can teach us.

I thought I would take as an example the humble potato. You know: (Solanum tuberosum), annual plant in the nightshade family (Solanaceae), grown for its starchy edible tubers. Spuds, in other words; French fries; chips; mash; you name it. It’s got to be one of the most friendly foods there is. It kept the Irish nation going on love, song and poetry for centuries (no thanks to the British). 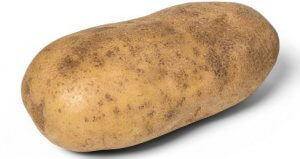 One of my patients, Iris, back in the early days, was badly crippled with arthritis. She could hardly walk. Her husband had been warned that she would need a wheelchair and he would have to give up work to tend to her. All very gloomy but just routine medicine, huh? Tragedy is what we do!

But in this case there was a lucky turn. I found she was severely allergic to potato and took her off it, completely (not the other nightshades, just potato). She recovered in just 2 weeks. It became a media cause celebre and I was suddenly the knight on a white horse! (This was about 1984.)

Iris went with a team of photographers and journalists to climb a mountain and be photographed at the top; a big challenge you’ll agree. In fact she beat all the troupe and was first to the top! I can’t find that article but I have the first feature that was done on her… 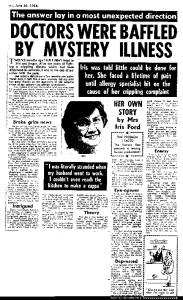 Fluke? No way. Take the young baby of 4 months (I forget his name but not his appearance). He was bloated (puffy) and plastered with eczema, his brief existence had been a terrible torment. He scratched till he bled. Parents had tried to restrain him but the little mite pulled his limbs free at night and went back to scratching. His sheets were covered in blood every morning.

The hospital had tried to help but there seemed little they could do, since at that time they did not believe in food allergies; “Mumby-jumbo” they called it and sniggered. The child was sent home with steroid creams, which were not helping and I think everyone expected the child to die. The parents were distraught and brought him to me.

Well, we did a food diary: what exactly was the child being fed? There was ONLY ONE repetitious daily food. Milk? Nah, it was potato!

I said it was the number one suspect and to stop him eating any more potato—and be very careful with infant formulas, where it could be hidden.

In the next 48 hours this little lad literally peed himself down to size; 2 or 3 litres of fluid came away through his tiny willy. The bloating vanished. The skin healed and was closed to the outside within 24 hours! It was an instant triumph… EXCEPT! …The parents still couldn’t believe it was potato. So, without telling me, they fed him another meal with potato… you can guess the result. The child’s skin erupted, he tore at it with his fingers and he was covered in blood yet again when I next saw him.

However, the parents were simple and good folk; they owned up to the experiment; everyone was happy I’d nailed the cause; he would never get to eat potato again.

Still thinking it’s rare? Let’s look at a lady who had very bad eczema. Yes, if you consult my writings in detail, you’ll see I have drawn a strong association between eczema and potato. Doctor pseuds call that “anecdotal” and it doesn’t mean anything, they say. Well, it means a lot to me and the torrent of lovely people who came past my desk in those exciting, pioneer years.

Anyway, back to the story. This lady had eczema so bad, she would wake up some days with her pajamas stuck to her. If she tried to peel off the garment, it would strip her skin from the flesh. For occasions like this she was given a special dispensation to just show up at ER, without an appointment, and they would soak her jammies off, clean her up and send her home with some more steroid creams.

Lord knows why: the fact she kept turning up every couple of weeks should have alerted any intelligent doctor to the fact the creams were not working!

Well, you will already have guessed it was potato… and it was. Result: stop eating potato; eczema GONE! Incidentally, potato was the ONLY allergy in that case.

So is it all skin stuff, hives (urticaria), eczema and the like?

No. One lady suffered with extreme depression for over 20 years. That turned out to be potato too. As I was finalizing the test, at the same moment the husband was at home peeling 3 lbs. of potatoes, which they ate every day.

In my writings I talk a lot about the fact that a person tends to get hooked on their allergy foods. It’s an addiction to the very thing that is making them ill.

Yes, she recovered within a week and threw out all her meds.

I had a patient who reacted to a pretty nice vitamin and mineral formula. I took it myself. But she got suicidally depressed. It turned out that potato shavings were the starch used to bind the pills and, yes, she was allergic to potato.

Any more? Yes, hundreds more. Let me just mention a wonderful executive businessman, Ron I think. He had chronic rhinitis; he’d had it for well over twenty years. A test showed a reaction to potato. My first wife and I were both in his presence when he sniffed through his nostrils for the first time in twenty plus years!

That was a smile to remember!

Last quick tip, before I get to the point: many people report having very itchy skin on their hands when they peel raw potatoes. But they eat the potatoes anyway! WHAT? It’s crazy, I know. But people often just don’t think things through: if it’s inflaming your hands, what is it doing to the rest of your body when you swallow it?

So, What Is The Point?

Nothing heavy. I’m just reprogramming my “Diet Wise” book approach and I am going to launch a whole program called “One Diet For Life” (actually OneDiet4Life).

It’s a journey I think everyone should make, at least once in their lifetime. Find out which foods your body likes and which ones your body HATES. You know what to do when you find your bandit foods! I can guide you through this. You’ll love it when it launches.

I’ll be sure to let you know, as a treasured subscriber! Stand by for an announcement soon. Meantime, if you have NOT read my book Diet Wise, you can learn more here:www.DietWiseBook.com. And you can read lots more great stories of near-miracle recoveries on that page.

The post Encounters With The Humble Potato appeared first on Dr. Keith Scott-Mumby.