Every person experiences inflammation as part of a normal immune system response to infection, sickness, or stress.  This is a system function called acute inflammation and your body needs it.  However, chronic inflammation is a different animal altogether – and one of the leading causes of major disease.

It has been proven to both cause disease and worsen disease.  Cancer, diabetes, heart disease, dementia, and autoimmune diseases are just some of the horrific consequences of chronic inflammation that rages out of control and is never resolved.

The Link Between Obesity and Inflammation

In a society where we are literally overloading our bodies with more food than we need, more than is even remotely healthy, it should come as no surprise that obesity and inflammation go hand in hand.

Sickness, disease, and just not “feeling right” are less often the result of nutrient deficiency and more often the cause of toxic overload.  Getting far too much of what your body either doesn’t want or cannot process.

You can imagine how much of that you’re exposed to with the explosion of fake food, fast food, and highly processed foods that have inundated our food supply in the last few decades.

Add to that the portions that are out of control and you’re literally overdosing your body.  The type of food and quantity of it that much of the population is consuming is making us sick.

It is creating an unnatural environment that acts aggressively toward your own tissues.  Once it gets to a certain point of toxic body burden, your normal system functions are unable to reverse or repair the damage on its’ own.

While not every American consumes ridiculous amounts of toxic foods, enough are that the statistics for obesity are horrific.  According to the U.S. Centers for Disease Control and Prevention (CDC), more than 70.7% of American adults are considered overweight or obese.

What’s shocking is that as bad as that statistic is, the United States isn’t even the most obese country in the world!  The Washington Post reported that there are at least 20 countries ahead of us on the list!  I say at least because this data was gathered in 2015 and the U.S. obesity rate has continued to climb several points.

Since 1975, the rate of obesity has tripled.  Barely four decades!  The World Health Organization (WHO) puts the number at around 1.9 billion in 2016.  To make matters worse, 41 million children (under age 5) and 340 million children (age 5-19) are overweight or obese.

Obesity is a worldwide epidemic.  One that is well-known, well-researched, but little is being done to combat it.  Despite all the workout programs available, the fad diets, and telling kids to exercise, the needle is not moving in the right direction.  Why?

Because our food supply is garbage.

The food manufacturers know their food is garbage, the government knows their food is garbage, and yet, it is produced, sold, and consumed at absolutely gluttonous levels.  Just so you’re aware, that last part is by design.  Food manufacturers discovered that adding certain things to foods – like sugar, salt, and unhealthy fat – eventually gets the human body addicted.

Here’s an excerpt from an article in The New York Times called “The Extraordinary Science of Addictive Junk Food” from 2013:

A chemist by training with a doctoral degree in food science, [James] Behnke became Pillsbury’s chief technical officer in 1979.  He was engaged in conversation with a group of food-science experts who were painting an increasingly grim picture of the public’s ability to cope with the industry’s formulations – from the body’s fragile controls on overeating to the hidden power of some processed foods to make people feel hungrier still.

The first speaker was a vice president of Kraft named Michael Mudd.  “There are no easy answers – for what the public health community must do to bring this problem under control or for what the industry should do as others seek to hold it accountable for what has happened.  For those of us who’ve looked hard at this issue, whether they’re public health professionals or staff specialists in your own companies, we feel sure that the one thing we shouldn’t do is nothing.”

Food manufacturers were now being blamed for the problem from all sides — academia, the Centers for Disease Control and Prevention, the American Heart Association, and the American Cancer Society.  The secretary of agriculture, over whom the industry had long held sway, had recently called obesity a “national epidemic.”

“We are saying that the industry should make a sincere effort to be part of the solution,” Mudd concluded.  “And that by doing so, we can help to defuse the criticism that’s building against us.”

Naturally, the CEOs of the food industry giants (General Mills, Nestle, and more) shot down all the efforts to dial back the addictive and unhealthy formulations that made them so much money!

The entire article is eye-opening as investigative reporting should be.  I urge you to look up the name and read it for yourself.  It definitely gives weight to the (known and ignored) link between obesity and chronic inflammation.

They are each causes of the other.  If you are obese, you likely have a higher rate of inflammation.  If you have high rates of inflammation, your risk of obesity (and everything else) is also much higher.

Either of these two conditions – if left untreated – will lead to illness and rapid aging. 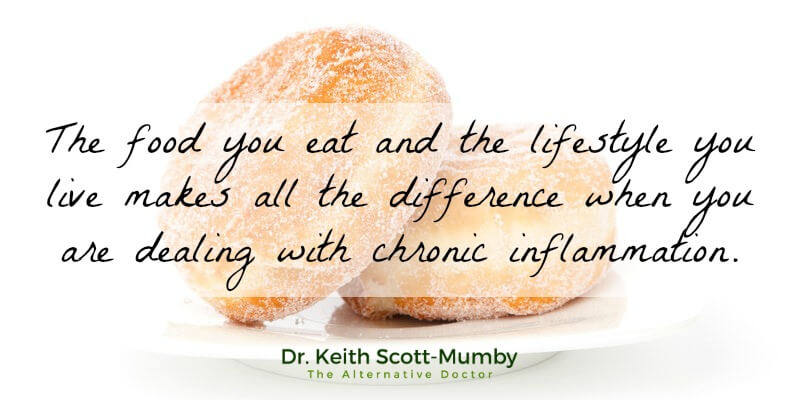 The Signs Can No Longer Be Ignored – By Anyone!

Researchers with the University of Oslo (Norway) found that obesity is just as dangerous as malnutrition on a molecular level.  It has been known for decades that malnutrition damages the immune system and leaves your body vulnerable to infections and disease.  The immune system uses temporary inflammation to fight bacteria, viruses, and parasites in your body.  When the risk is resolved, the inflammation lowers.

It turns out that eating too much boosts the immune response without a threat, causing chronic inflammation, the verified source of some of the biggest killers on the planet.

Professor Bente Halvorsen explained, “With this new knowledge, we can better understand why too much food can cause such serious diseases as heart attack, stroke, cancer and chronic intestinal inflammation.  We can reduce the inflammatory reaction by losing weight.”

There is much more research to be done but initial results point to the mitochondria – our cells’ power sources – and how they convert fat to energy.  Too much food stresses these tiny power plants and causes damage that leads to chronic inflammation.

To break it down…

Another study from the Institute for Molecular Bioscience at the University of Queensland in Australia found that PAR2 – a protein found in abundance in belly fat tissue – causes an intense inflammatory reaction in humans and rats.

The study is to find an “obesity drug” to block what high fats and sugars do to your body.  The medical industry is scrambling to figure out which comes first…obesity and then chronic inflammation or inflammation and then obesity.

The answer is rather simple.  The two conditions are linked on a molecular level – proven by countless scientific studies.  Rid yourself of one and you reduce the other and vice versa!

The right combination of foods for you to consume is likely different from anyone else.  Learning what you truly need to eat – as well as what you should never eat – is the first step to ramping up your body’s ability to absorb the right nutrients and detoxify your system.

Getting enough sleep, exercising, and reducing stress are crucial to total body health and anti-aging but it is your food consumption that makes all the difference!  What you eat and how much you eat determines the levels of chronic inflammation.  Your “perfect eating plan” is exclusive to you.

Experts estimate that as many as 80% of visits to the doctor for random complaints are caused by adverse reactions to something in your food supply.  Not necessarily a food allergy so much as a food your body doesn’t recognize or know how to process.

Food is the first and most important step in changing your life because it is the best way to minimize chronic inflammation that leads to depression, disease, and aging.  Before emotional, mental, and professional goals – you must take control of your physical body.  When your body is healthy and strong – other life changes can be focused on with greater intensity.

First, get well.  For more information about finding the perfect eating plan that works for you, read my book Diet Wise right now.  Your body will be glad you did!