Pain is the King of symptoms; it demands respect and can be cruel when ignored. It erodes the quality of life, demoralizes the patient and causes a horribly negative emotional response. Those in chronic pain are particularly miserable, because they know it will be back again tomorrow, and the next day, and the next…

But acute pain is bad too, because the patient is not used to it and has no practice at enduring its difficulties.

Yes, pain is medicine’s number one call to action. Nobody likes pain.

But pain isn’t wholly a negative thing, of course. It doesn’t feel good but it has a useful purpose. Pain is basically telling you something is wrong and you need to take action. Typically, fixing the problem fixes the pain. Of course this is a very simplistic view of pain but it all starts from this premise.

Just masking the pain with analgesic drugs is not solving the “problem”, it’s just masking it.

Hippocrates gave us the term ponos and from it comes our word pain. He meant the body’s fight back. Without it there was no disease process but we would quickly die. The ensuing turmoil may be unpleasant but it is a necessary part of the disease limiting process.

If you block symptoms, you block the natural defences too. The body fails to expel the disease properly. Long-term problems then become likely and modern medicine is nothing if not about chronic disease and its management. Have we created our own lingering pathology by constantly damping down symptoms and so thwarting the full healing process?

The alternative healers’ view of pain is that it denotes blocked energy. Where natural life force is held back or stopped, then build-ups can occur and sooner or later these announce themselves as pain. A simple example would be a gallstone or kidney stone; these impact in their respective drainage ducts, obstructing all other flow, and anyone who has experienced the resultant colic will know that it is severe pain indeed, until the blockage is relieved.

It is fashionable, though to me useless, to divide pain into what is supposed to be “real” pain and what is “in the mind”. The total folly of this view is that all pain is in the mind. Think about this! Pain is just a perception, an interpretation of signals. True there are reflex responses to stimuli that are so fast that the mind could not possibly have time to be involved, at least on the simple neurological model.

But the action (say, withdrawing a hand from a hot surface) is done without any feeling of discomfort whatever. Done quickly enough, there may be no sensation of pain at all, though a fraction of a second longer could have resulted in very unpleasant sensations and the beginning of tissue damage.

The fact is that “pain”, as such, is centrally organized and perceived. That being so, why bother to distinguish between peripheral pain and that which is felt centrally but without any (apparent) visceral or somatic cause?

It is particularly unworthy of doctors to show a pejorative attitude towards the latter, while supposing the former is the only one in need of help and relief. At the end of the day pain is pain. If the patient has it, he or she is distressed. If it is supposedly created in the mind (psychosomatic), then this must be for some purpose and it is the physician’s job, no less than for “real” pain, to find the cause and bring relief from suffering. 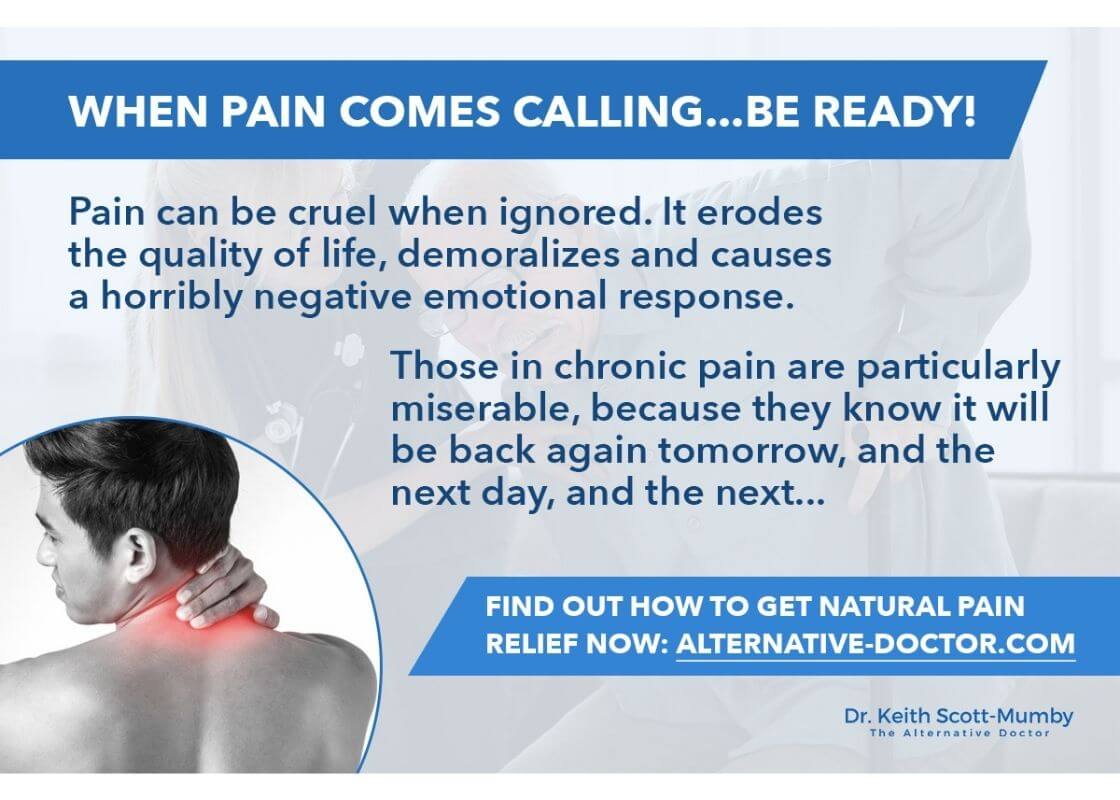 You’ve probably heard of the pain gating theory, developed by Ronald Melzack, an Associate Professor at MIT, and Patrick Wall, a leading British neuroscientist. Signals can be so rapid and intense they overwhelm the pain pathways and it shuts down; the patient feels little or nothing. It’s only a theory but seems to fit the facts.

But pain gating is not the last word in pain science.

That same Robert Melzack and another researcher, Kenneth Casey at McGill University, published a another significant paper in 1968 describing pain in terms of its three dimensions: quality (sense of the intensity, location, quality and duration of the pain), degree of unpleasantness and emotional-cognitive, meaning what the patient thinks about the pain, including cultural values.*

In my latest book The Ultimate Guide To Natural Pain Relief I have simplified these 3 factors to:

Melzack and Casey theorized that pain intensity and quality are not simply determined by the magnitude of the painful stimulus, but “higher” cognitive activities can influence perceived intensity and unpleasantness.

That’s another way of saying what I just said: intense mental engagement can render one temporarily numb to pain sensation. But it’s also saying we can do it purposefully; lose the pain by conquering it with the mind. Even placebos can work in this way.

Thus, excitement in games or war appears to block the first dimension of pain.

Just how well that can work is illustrated by a famous anecdote from the Battle of Waterloo. Henry Paget, 1st Earl of Uxbridge, was sitting on a horse, next to The Duke Of Wellington, when his right leg was taken off by a cannonball. He said calmly, “By God, sir, I’ve lost my leg!”, to which Wellington looked down and replied, “By God, sir, so you have!”

The engagement in such a ferocious battle was so intense, that pain wasn’t felt right away. Even during the clean-up surgery afterwards (anesthetics were still in the future, of course), Uxbridge smiled and said, “I have had a pretty long run. I have been a beau these forty-seven years, and it would not be fair to cut the young men out any longer.”

Wellington was known as “The Iron Duke” but I think Uxbridge was pretty sanguine too. Tough as nails! 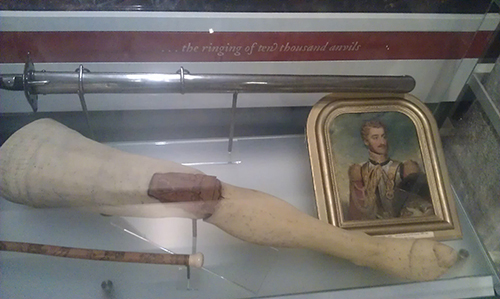 Uxbridge’s false leg, now on display in the Household Cavalry Museum in London

The point is that the brain and our mind experience can shut out pain completely, even without an anesthetic. The degree of stimulation needs to be very high indeed; at the life-and-death level.

There have been many ways of dealing with pain, from extremes like tying a rag around the leg and setting fire to it (a painful distraction) to cutting pain nerves (a permanent and destructive surgical “cure”).

More sensible methods include chemical suppression of pain signals (drugs), electrically closing the pain gate (TENS machines), hypnosis or other means of changing the reaction to pain and anti-inflammatory substances (most pain is inflammation, in some guise or other).

But most important and valuable of all—the REAL way to deal with pain—is to get natural healing going, so that the body recovers and the pain disappears naturally. It’s the ultimate pain relief!

There is one important summary method I’ll leave you with: buy my new book and get it on your shelf or hard drive! It’s part of the program I’ve been calling “health literacy”. You need to know this stuff.

Most pain medicines are dangerous, especially when mishandled. But, like with antibiotics, there are hundreds of natural alternatives to orthodox drugs for controlling and eliminating pain. Many are surprisingly high-tech and modern (electronic devices). There are so many ways to control pain that just suppressing it with poisons (which is all pain drugs are) seems a very primitive way of dealing with it—not much better than the burning rag idea!

Get educated and never “suffer” with pain again. Go here to learn more about my latest manual: The Ultimate Guide To Natural Pain Relief. 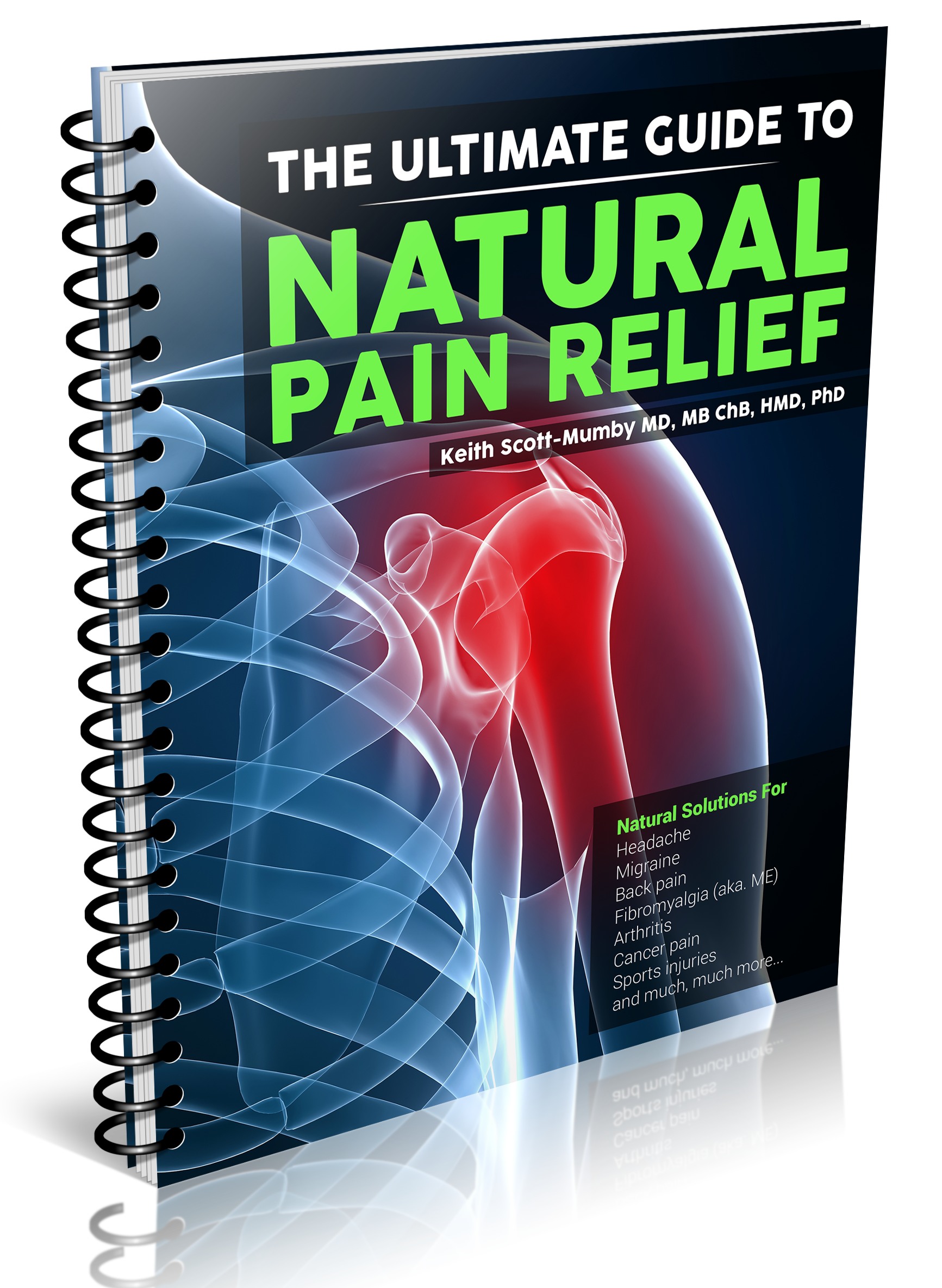